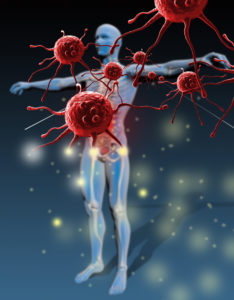 Researchers at UCLA have made a major breakthrough that has profound implications for anyone suffering from an autoimmune deficiency disorder. They discovered a way to create synthetic T-cells which are pivotal to the body’s autoimmune response system.

The quest to create artificial T-Cells has been a long one, and fraught with a great many difficulties, because these cells have a number of unique qualities, not the least of which is their ability to deform, changing their shape to squeeze through tight spaces (shrinking to about one quarter of their normal size in some cases) so they can get to the site of an infection, anywhere in the body, then growing to as large as three times their normal size to overwhelm a would-be invader.

Once at the site of an infection, they release a variety of regulatory or inflammatory signals.

These complexities have made it impossible to replicate a functioning T-cell, until now.

The research team found success by using a microfluidic system, combining an alginate biopolymer with mineral oil, which merged to form a structure quite similar to the T-cells found in the body. Unfortunately, this was only half the battle. While the shape and behavior of the synthetic cells was accurate, the team needed a way to chemically encode their creations such that a human host would recognize them as T-cells and not reject them as just another form of infection.

To get around this problem, the team coated the synthetic cells with phosopholipids, which gave their creations a synthetic cellular membrane that closely mimics the membrane found in human T-cells. To achieve the needed elasticity, the group bathed their synthetic cells in a calcium ion bath, changing the concentration of the calcium ions to either shrink or grow the T-cells as needed.

That accomplished, they then they linked their newly made cells with CD4 signalers via bioconjugation. CD4 signalers are the mechanism by which T-cells are activated to attack various forms of infection or cancerous cells.

Their experiments were wildly successful, and in laboratory tests, the synthetic T-cells were able to behave in ways that closely mimicked their naturally occurring counterparts, and successfully fended off infectious agents.

Of course, we’re still quite some distance from human trials, but these early experiments are beyond promising. What’s more, the research team said that the same basic process could be used to create other types of artificial cells, including microphages that could target specific diseases.

The implications here are enormous. Untold millions of people suffer from a variety of conditions that weaken the body’s immune system, leaving it increasingly incapable of warding off infections and diseases that a healthy host could easily fend off. This, as often as not, is what proves to be fatal to people afflicted with such conditions.

If the UCLA team has anything to say about it, the day is coming when scientists will have access to a database that houses the “recipes” for a growing collection of artificial cells and will be able to custom-design treatments that are vastly more effective than anything available today. Great news indeed.