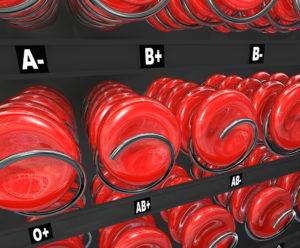 In January of this year, the Red Cross faced a crisis it’s becoming all too familiar with.  With their resources stretched thin on account of storms battering the eastern seaboard, the organization sent out an urgent call for blood donations.

While all blood is welcomed and appreciated, the agency is especially interested in acquiring type-O blood, which can be administered to anyone, of any blood type.  It’s universal, which makes it a rare prize indeed.

Recently, a group of researchers has identified enzymes from the human gut that can transform type-A and type-B blood into O up to thirty times more efficiently than previously studied enzymes.  The team recently presented their findings at the 256th National Meeting & Exposition of the American Chemical Society (ACS).

Dr. Stephen Withers, a member of the research team, had this to say:

“We have been particularly interested in enzymes that allow us to remove the A or B antigens from red blood cells.  If you can remove those antigens, which are just simple sugars, then you can convert A or B to O blood.”

One of the biggest hurdles that Dr. Withers and his team faced though, was the sheer number of enzymes to investigate.  Here, the group turned to colleagues at the University of British Columbia (UBC) for assistance.

UBC uses metagenomics to study ecology, which is essentially a process of taking all the organisms from a given environment and extracting the sum total DNA of those organisms, all mixed together in one giant data set.  This enabled the team to cast an extremely wide net, sampling the genes of millions of microorganisms without needing to isolate individual cultures.

Their wide net caught something, and it turned out that the enzyme that held the key already lives inside us, in our gut biomes.

Glycosylated proteins known as mucins linen the wall of our digestive systems, where they provide sugars that serve as “hooks” or points of attachment for gut bacteria, while simultaneously feeding them as they assist in digestion.

Some of the mucins are quite similar in structure to the antigens of type-A and type-B blood, so the team began researching the enzymes that the bacteria use to take sugar from mucin.  After a short search, they found what they were looking for.  A whole new family of enzymes that are devastatingly effective at devouring blood antigens, morphing A and B blood into O very efficiently.

On the heels of their successful collaboration with the University of British Columbia, the team has reached out to them again for the next phase of their research, working with UBC’s Centre for Blood Research to validate the enzymes and test them on a larger scale in anticipation of clinical testing and human trials down the road.

“I am optimistic that we have a very interesting candidate to adjust donated blood to a common type.  Of course, it will have to go through lots of clinical trials to make sure that it doesn’t have any adverse consequences, but it is looking very promising.”

Promising indeed.  And great news for our nation’s blood supply.